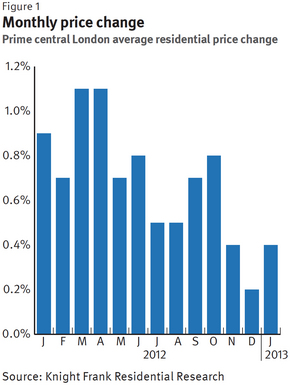 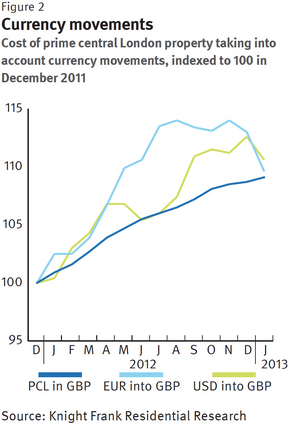 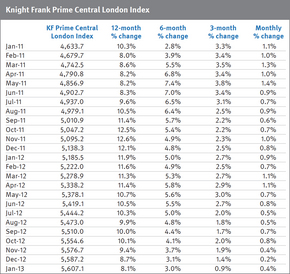 Price growth in the prime central London property market continued into the New Year, but what impact has sterling’s recent slide had on the sector? Liam Bailey examines the data and shares his forecasts for 2013.

The rise in sales volumes which we saw at the end of 2012, following the publication of the draft Finance Bill and the clarification offered regarding £2m+ property taxation, has carried over into this year. Against an ongoing backdrop of domestic and global economic difficulties, property values in prime central London climbed a further 0.4% in January.
There is little doubt that the clarification provided by the Autumn Statement and draft Finance Bill has contributed to a rise in sales volumes – releasing the pent up demand seen between June and November 2012 as buyers adopted a “wait and see” approach.

The demand for luxury London homes from overseas buyers looking for a safe haven for their money, as well as a slice of London life, has helped drive price increases over the last few months. The drop in the value of sterling in recent months has made property an even more appealing investment (figure 2).

Escalating concerns over the UK economic outlook have increased the pressure on the pound over the last few months. As our research shows, while prices for prime central London property increased 0.5% since

November, currency movements mean that for euro-denominated buyers property values have actually declined by 4% in that time, making entry into the market more affordable for European buyers.

The flipside of this, of course, is that eurodenominated buyers who purchased property late last year have seen the value of their investment fall in recent months. However, as the Eurozone crisis continues to drag on, the long-term appeal of owning property in a ‘safe haven’ such as London is unlikely to diminish.

According to research from our latest London Review, South Kensington drew the largest number of international buyers as a percentage of sales in 2012, with Knightsbridge, Kensington, Hyde Park and Belgravia also attracting large international interest. Buyers from France and Italy were the most active Europeans in the market in 2012. To find out more about international investment in London see our International Residential Investment in London report. Knightsbridge remains the best performing region in terms of price growth, with a 1.5% rise in January. Notting Hill, which has seen prices steadily decline since September, reversed some of these losses with 0.8% price growth in January.

Our outlook for 2013 remains unchanged – we expect to see no significant price movement in the prime central London property market this year, before more moderate price growth from 2014 onwards.

“Currency movements mean that for eurodenominated buyers property values have actually declined in the last two months, making entry into the market a little more affordable for European buyers.”

* Riverside covers the Thames riverfront from Battersea Bridge in the west running east to include London’s South Bank. The City Fringe encompasses the half-mile fringe surrounding most of the City including Clerkenwell and Farringdon in the west and Shoreditch and Whitechapel in the east.