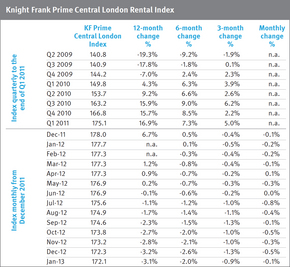 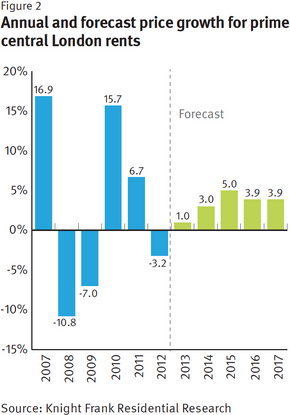 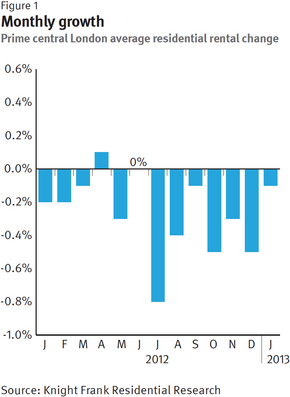 Despite a further fall in average prime central London rents in January, an improved outlook for employment and business sentiment should provide landlords with better news in 2013, says Liam Bailey.

While our monthly chan  ge figure for January confirms a continuation of the decline in prime central London rents seen during the second half of 2012, there are positive signs which indicate a more stable market for 2013. The 0.1% decline in January, although an improvement on the -0.5% recorded in December, represents the seventh consecutive month of decreases.

As we have noted previously, weakening job prospects in the financial service sector played their part in creating the conditions for a fall in rents during 2012 and if we look at the latest data from Morgan McKinley, the specialist City recruiter, it would appear the outlook remains bleak, with the number of job vacancies in the financial sector down 24% in December compared to the previous year.

However, while the employment figures suggest that the City economy is struggling to gain traction, London’s long-term investment appeal can be seen by the recent growth of the technology and media (TMT) sectors. According to Knight Frank’s latest Central London Quarterly, TMT accounted for almost 30% of all office take-up across central London in 2012, a trend that should ultimately serve to increase tenant demand.

While rents remain under pressure, activity metrics provide a more positive view of the market. Rental applicant numbers were up 23.2% year-on-year in the three months to January, although, as has been the case in recent months, the demand was strongest in the sub-£1,000 per week bracket. New instructions were 21.1% higher over the same period.

Across prime central London rents were either flat or d
eclining in all areas with the exception Kensington. Rents in this area increased by 0.9%, the first time in ten months that rents increased. At the other end of the scale, average rents in St John’s Wood declined 1.2%, compounding the 9.7% decline seen in 2012.

Despite this, our view, informed by a positive outlook for employment and business sentiment, is that rents in prime central London will increase by 1% this year, before posting growth of 3%, 5%, 3.9% and 3.9% in the years to 2017.