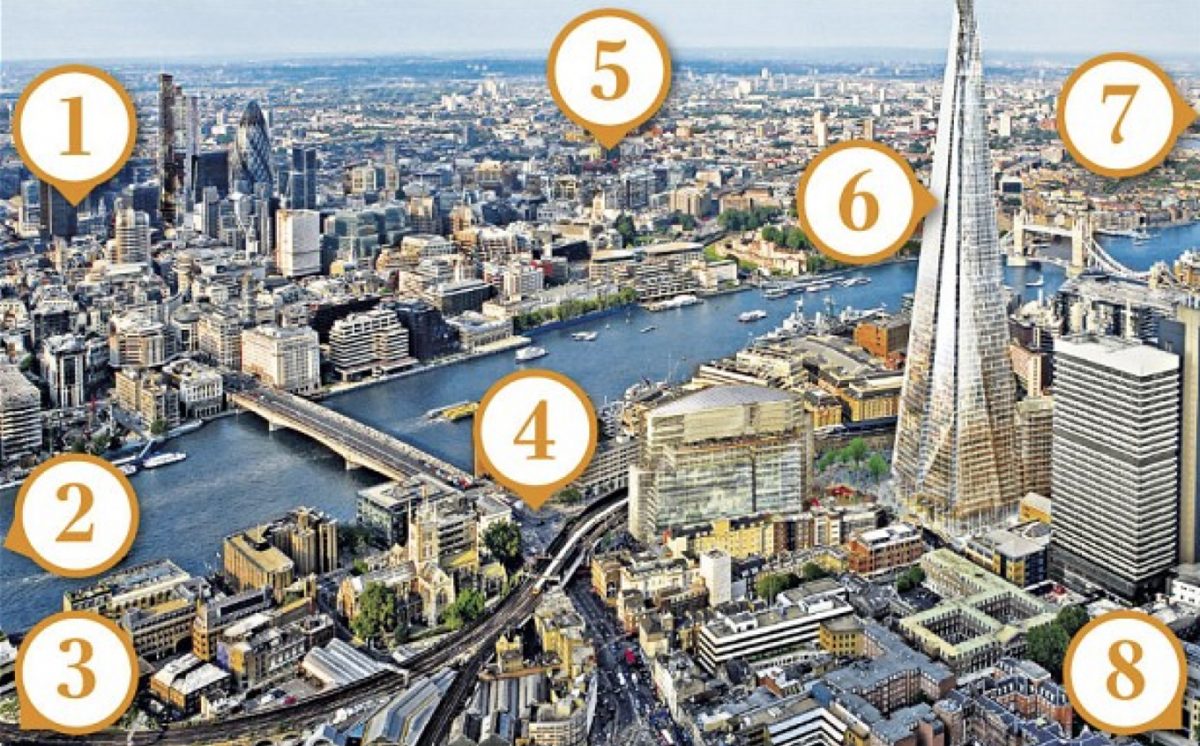 Its recession seemingly consigned to history, London is surging ahead with a clutch of property projects that are breathing life into some of its more neglected corners.

The London skyline has traditionally been a slow-moving beast. While cities in Asia or the United States throw up dozens of new buildings virtually overnight, the capital’s horizon evolves at a more sedate pace. That’s all changing. A clutch of thrilling new buildings is revamping the skyline and helping to fulfil the desperate demand for housing. It’s taking place all over the city, but particularly in a southern stretch between London Bridge and Lambeth.

Flagship structures such as The Shard, Battersea Power Station and St George’s Wharf tower (the tallest residential-only building in Britain) are the most obvious. But they are merely the tip of an iceberg of exciting developments.

Compared with the rest of the country, London’s recession was over quickly. According to figures from Savills, London prices are now up 15.8 per cent on their 2007 highs, and 5.1 per cent in the past year. The estate agent predicts an average increase of around 25 per cent over the next five years. Developers can be confident of returns on their investment, and are responding with innovative new designs.

Traditionally the capital has shied away from tall buildings compared with other world cities. This is partly because of our strict planning laws. Since Queen Victoria found her view of Parliament blocked by Queen Anne’s Mansions, and the subsequent London Building Act 1894, London has preferred low-rise to high. The typical London house is the period terraced or semi-detached home, often divided into flats.

“For a long time it was just West India Quay and the Barbican,” says John Hitchcox, chairman of Yoo, which has developed 50 buildings above 30 storeys in more than 27 countries. “London is the world’s most successful city, and people want to come and live here and spend their money. That means you either have urban sprawl, or tall buildings. The green belt stops the sprawl, so you have to build up,” he says.

For an example of a city where the sprawl has taken over, he says, we only have to look across the Channel. “Developers might not like to admit this, but we have a great tradition of social housing existing side-by-side with more expensive properties. You get a much better mix of people. In Paris, the less well-off have been forced to the périphérique.”

There are other historical reasons why we haven’t built high, adds Hitchcox. “We had a window tax for 140 years, and London’s sightlines are also ingrained into our consciousness.

“Some council housing during the Sixties and Seventies gave them a bad press, but that was mostly about poor building techniques. It’s completely different now. Technology has advanced to such an extent that in Tel Aviv, for example, we were able to build a tower where every apartment had its own protective bomb shelter.”

The issue of high-rise versus low-rise living is also to do with the British perception of housing. While New Yorkers are used to lateral apartment life, we still prefer houses.

“We’re hard-wired into having a front and back lawn,” explains James Sellar, CEO of Sellar Developments.

“The question is, how do you build properties in the centre of London which have the qualities of a home?”

Sellar’s company’s redevelopment of the London Bridge quarter is a striking example of the new model of London building. At the centre of it all is The Shard. Europe’s second-tallest building (its temporary crown was reclaimed by Moscow at the end of last year) includes the highest apartments in Europe. They occupy floors 53 to 65 of 72 in all. Even the lowest is higher than any other residence in London. They are reported to be going on sale later this year. With prices said to be between £30 million and £50 million, you pay for the view.

“The homes at The Shard are a unique collection,” explains Sellar. “But there is also a fantastic offering in the rest of the quarter, with a mixed tenure approach.” When complete, the revamped area around London Bridge will have a blend of shops, offices and homes ideally suited to the capital’s young workers.

Much of London’s recent growth has been driven by foreign money, particularly from eurozone countries, Russia and the Arabian Peninsula. But Sellar is keen to stress that the London Bridge quarter won’t be like a bank vault for absent owners.

“We want the schemes to be lived in,” he says. “We’ve spent a lot of time studying urbanism, and what works in different places: Singapore, New York, Hong Kong, Chicago. We’re taking the idea of the terraced street and looking at it vertically.

“There are cafés and restaurants at street level, and we’re putting in residents’ lobbies, sky lobbies. In some there are beekeepers making honey on the roof. Not everyone will use these facilities, of course, but hopefully they’ll become places where people can meet each other and interact.”

The mixed offering, together with London Bridge’s extensive transport connections (the railway station is receiving a complete overhaul) make it appropriate for many different sorts of people.

“Whether you’re a married couple pre-kids, or if you’re a family and have children, it’s great. Rather than only seeing your kids at the weekend, you can take them to school in the morning, or even pop back at lunchtime.”

Hitchcox agrees. In the time-starved capital, he points out, any more hours you can squeeze from the day are a blessing.

“If you reduce the commute you give yourself more hours,” he says. “Either you can spend more time with your family, which improves your quality of life, or more time in the office, which makes you more productive.”

This new breed of highly visible, high-end living, means that developers have to pay attention to design. Having a building that everyone can see puts a greater responsibility on the architecture. You can’t get away with throwing up any old concrete monstrosity if you are adding to London’s distinctive skyline, and potentially blocking someone else’s view of a landmark. Views are precious: this week there was a powerful reaction when it was announced that the “right to light” planning laws could be under threat.

This is part of the reason why Sean Ellis, chairman of St James for Berkeley Homes, enlisted Graham Stirk, of Rogers Stirk & Harbour , for the Riverlight development, the first phase of the Nine Elms regeneration, pictured far left.

“Having a big name helps in a number of ways,” he explains. “It helps with planning permission, because the council can trust the brand, and it helps you get the most out of the space. The tower only has a footprint of one and a half tennis courts, but Graham cantilevered the building out so we get more space higher up.”

Not all the new London developments are skyscrapers, of course. Building upwards is expensive. And in parts of the capital there is still undeveloped room nearer the ground.

The need for prime living space has become so acute that even the most stubborn sites are kicking into gear. After years of discussion, King’s Cross is taking shape. One Tower Bridge will create 353 modern homes across the river from the Tower of London. The long-mooted redevelopment of Elephant and Castle is under way, too. The latter will eventually provide around 5,000 new properties, including 1,650 affordable homes. It has not been without controversy: the demolition of the infamous Heygate Estate led to accusations that some people faced being priced out of the area.

Further west, the juiciest abandoned site of them all is emerging from long neglect: Battersea Power Station. The landmark has been passed from developer to developer like a hot potato for years, but building is at last under way. There is no shortage of demand: the first wave of homes – 75 per cent of the total, valued at £600 million, sold out within five days. Impressive: particularly when you consider that the starting price for a studio was £338,000. The investment by the Malaysian consortium responsible seems less like a gamble, and more like a sure thing.

The Victoria area, traditionally the ugly brother between Belgravia and Pimlico, is enjoying a major overhaul. Over the next six to eight years, more than 125,000sq metres of office space, 19,000 of retail space and 300 new homes are being added. The biggest of these is Victoria Circle, opposite the station, where a six-acre site is being turned into a five attractive new buildings.

In many parts of the country, property tells a rather less optimistic story at the moment. Lending is still tight, and apart from the commuter centres in the South East, prices are expected to stay flat for the time being.

All of which means we must treasure London more than ever. It is currently the engine helping keep Britain afloat. These developments are tidying up some of the capital’s ugliest corners, and turning them into new neighbourhoods. Our admirable social housing regulations mean that from Stratford to Nine Elms, there will be thousands of new affordable homes, too.

Britain finds it ever more difficult to sell things to the world. In London, we have an asset for which there seems to be nearly unlimited demand.

Hard-working, salaried professionals want to live, work and spend in London. The new generation of buildings will help them to do so in style and comfort, and add to the economy.

It may not be fashionable, but we should celebrate the good news while it lasts.